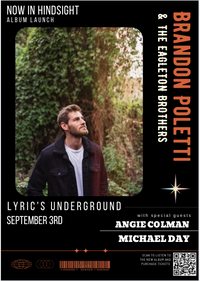 Join Brandon Poletti & The Eagleton Brothers as they launch their brand new album out into the world. The new album, Now In Hindsight, was written by Brandon and details elements of life such as grief, love and the fear of growing up in a beautifully eloquent way. This includes their single, 'Charlotte Avenue,' which was nominated for a WAM award as the best new country song. In recent years the group have gained a reputation as one of the most exciting new country rock bands from Western Australia with their fusion of great lyrics, vocal harmonies and twangy guitars. This is the group's first release in over a year and it's bound to be a big celebration!

Also joining them on the night will be Angie Colman, who writes and plays catchy pop ballads with heartfelt lyricism that'll have you tapping your feet. As well as Michael Day who creates a unique style of indie-folk music that evokes a strong sense of nostalgia with his depthful lyrics.